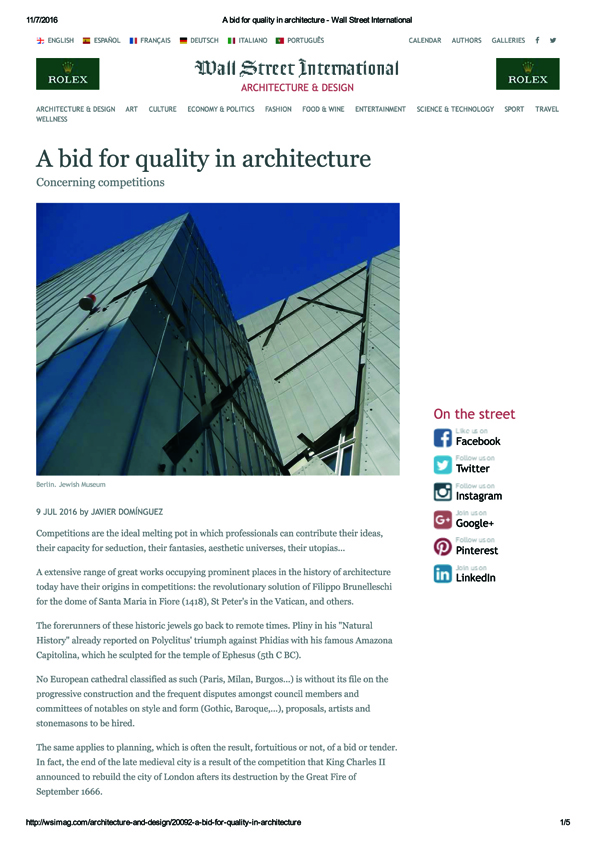 Articulos
A BID FOR QUALITY IN ARCHITECTURE.
11 julio, 2016 By Javier Dominguez
0

A BID FOR QUALITY IN ARCHITECTURE.

Competitions are the ideal melting pot in which professionals can contribute their ideas, their capacity for seduction, their fantasies, aesthetic universes, their utopias…

A extensive range of great works occupying prominent places in the history of architecture today have their origins in competitions: the revolutionary solution of Filippo Brunelleschi for the dome of Santa Maria in Fiore (1418), St Peter’s in the Vatican, and others.

The forerunners of these historic jewels go back to remote times. Pliny in his «Natural History» already reported on Polyclitus’ triumph against Phidias with his famous Amazona Capitolina, which he sculpted for the temple of Ephesus (5th C BC).

No European cathedral classified as such (Paris, Milan, Burgos…) is without its file on the progressive construction and the frequent disputes amongst council members and committees of notables on style and form (Gothic, Baroque,…), proposals, artists and stonemasons to be hired.

The same applies to planning, which is often the result, fortuitious or not, of a bid or tender. In fact, the end of the late medieval city is a result of the competition that King Charles II announced to rebuild the city of London afters its destruction by the Great Fire of September 1666.

Once again in the 20th century, the French capital revealed to the entire world the enormous attraction of architecture, as it became the stage for highly relevant international competitions as from the 70s.

The superb Paris of the Mitterrand decade would have been unthinkable without laboratory tests in the form of competitions, whose magnificent fruits are so visible today: Le Musée d’Orsay by Gae Aulenti, l’Institut du Monde Arabe by Jean Nouvel, l’Opéra de la Bastille by Carlos Ott, Le Grand Arche de la Défense by Otto von Spreckelsen.

Many of the great masters of modernism owe their fame to competitions, and notable figures like Britain’s James Stirling, Norman Foster and David Chipperfield or Spaniards such as Julio Cano Lasso, Javier Saenz de Oiza and Rafael Moneo became the barons of all kinds of competitions and tenders for decades.

As opposed to the unique and exclusive option associated with a direct commission, the competition or tender (in its many variants) is always a test of democratic objectivity, a bid for freedom, plurality, diversity and especially for the «new» in comparison to established values and styles already known or consecrated..

And this is the case regardless of the competition’s scope, be it local, national or international; its size, large or small (either for the scope of the project or for the awards), and its character, restricted (by invitation, design or execution,…) or free and open (no doubt preferred by architects).

On the other hand, competitions (if they are serious, as there are many kinds) frequently allow for the discovery of new promises, enabling them to compete on equal terms (at least this is what the International Union of Architects – IUA – is fighing for) with even the most experienced professionals.

It is a pity that the use of competitions calling for ideas or architectural projects in Spain continue to obey the discretionary decisions of public sponsoring agencies without a clear commitment to a set of general rules. All too often they make use of them with a kind of mixture that gives them powers of direct awarding that are more typical of direct commissioning, thus avoiding the inherent limitations and procedural controls of other regulated methods.

With a legal framework (Act 13/1995 on Public Administration Contracts, Act 30/2007 RDL 3/2011, revised text… ) which is open to arbitrariness, it is very difficult to prevent the outright sponsoring of competitions, which policymakers so often make, imposing their particular personal tastes on the outcome, despite their obvious technical and cultural defects in many cases.

It is therefore urgent that we re-claim and recover the principles of merit and capacity in tenders, establishing the role of architectural competitions fairly and accurately in line with internationally contrasted models.

The Spanish Administration should recognise that professional services provided by architects play an important role in the economy, not just as an example of end consumer goods but above all as actual inputs. Hence the importance of the appropriate functioning of competitions to benefit from the potential synergies of this professional group in promoting economic growth and employment.

It would be wrong to continue the deregulatory policies of Spain’s Popular Party now that it is evident that the suppression of controls and their prior inefficiency have been one of the main causes of both the financial tsunami (bankruptcy of regional banks) and corruption.

For years there have been attempts to undermine the independence of the liberal professional in order to achieve greater competitiveness, on the one hand blocking professional associationalism and mandatory architectural approval, while on the other the administration has been imposing the practice of auctioning off tenders to provoke the freefall of architectural fees.

The Court of Luxembourg has repeatedly ruled on the irreplaceable role of associations, whose mission, role and social function have an express basis in European law. The withdrawal of the Act on Professional Associations Services -LSCP- settles this matter once and for all.

It is time now to put an end to the malpractice sanctioned by the governments and the autonomous communities of the nation that the price of bids should be the only factor for selecting the winner of a competition, which has resulted in numerous contracts at prices well below those minimally required to perform a quality service.

Because awarding by auction evidences a spurious consideration of architecture itself as simply another commodity, without regard to its own specificity and callously oblivious to the innovative, cultural, sociological and artistic implications of architectural practice.

The consequences of such erratic procedures damage our country’s future, threatening it with the progressive impoverishment of excellence in this profession, and the consequent loss of competitiveness on the international market.

It also implies a disincentive for new graduates, especially for the gifted, without the administration doing anything to mitigate the continuing drain of new talent to foreign countries.

And it is not just a question of rewriting the rules of the game, or setting minimum dignified fees as agreed between the administration and the professional associations It is imperative that we strongly support youth employment, such as Italy does, creating job offers for youth and requiring that public competitions and tenders incorporate in their teams young people with less than five years of experience.

Spanish legislation has historically prioritised the competitive selection system (experience, expertise, best design,…) and not today’s fad of an architectural auction. It is a fallacy to say that there are European directives against this. In fact, in our community environment (Germany – Architects and Engineers’s Fees HOAI – and even in the United States – the Brook Act -) a set of minimum cost factors are established so that competitions can strictly comply with criteria for quality.

After the recent wave of unjustified overruns (Terra Mítica, City of Arts and Sciences), budgetary overspending and improvised planning, and even with buildings now closed down (swimming pools, auditoriums, airports,…) because they cannot be properly maintained, it is unacceptable to continue to protect reckless underbidding and unfair competition.

It is urgent to recover the criteria of equity, merit and ability, re-establish systems that ensure rigorous analysis and strict control of the construction process – from conception, planning, management, all the way though to material execution – and the quality of the final product. And this can only be secured with architects who are absolutely independent of political motives and who are properly remunerated.

In addition, the Associations themselves, which are the heirs to long training traditions, also need to reinvent themselves if they want to lead the way in the face of today’s profound socio-economic changes. Only with a strong associational organisation can architects contribute to local and regional structuring of the territory by strengthening the value of their names and responding to the growing demand for R&D&I in the industrial and real-estate sectors.

Today more than ever it is necessary to oppose the demagogic slogans of profitability as the supreme value, which seeks to maximise returns while minimising the cost of an architectural production. In short, we need an architechnocracy, as already defined in 1965 by one of the founders of Bauhaus, the Swiss-French professor Claude Schnaidt.

For centuries, architects have resolved and formalised the vital needs of societies in which they have lived, and architecture became the true form of their civilisation, according to Norberg Schulz. Therefore, it is inexcusable to consider the work of the architect as mere intellectual labour, as the result of such a laborious pursuit – architecture itself – is and will always remain part of service and culture.