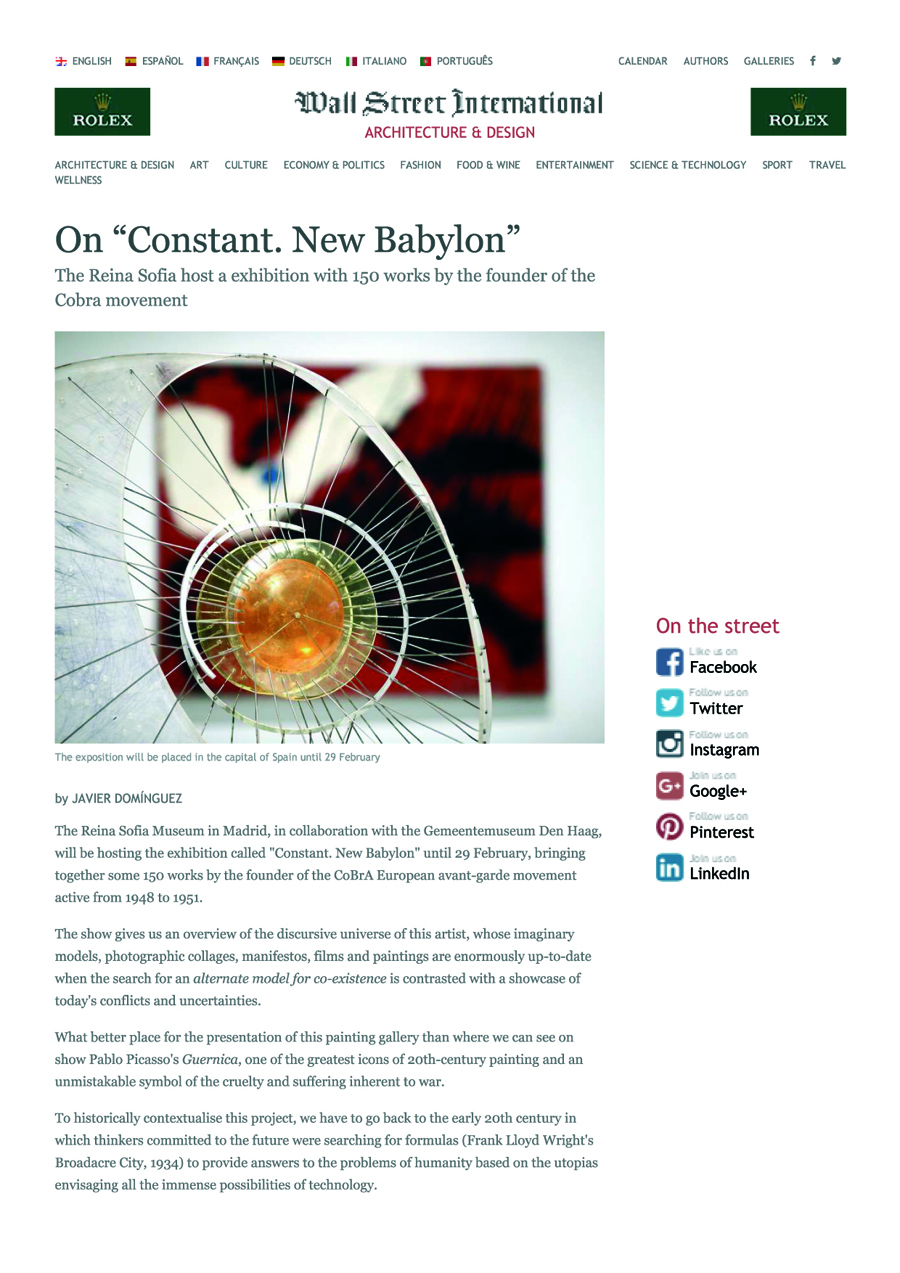 The Reina Sofia Museum in Madrid, in collaboration with the Gemeentemuseum Den Haag, will be hosting the exhibition called «Constant. New Babylon» until 9 February, bringing together some 150 works by the founder of the CoBrA European avant-garde movement active from 1948 to 1951.

The show gives us an overview of the discursive universe of this artist, whose imaginary models, photographic collages, manifestos, films and paintings are enormously up-to-date when the search for an alternate model for co-existence is contrasted with a showcase of today’s conflicts and uncertainties.

What better place for the presentation of this painting gallery than where we can see on show Pablo Picasso’s Guernica, one of the greatest icons of 20th-century painting and an unmistakable symbol of the cruelty and suffering inherent to war.

To historically contextualise this project, we have to go back to the early 20th century in which thinkers committed to the future were searching for formulas (Frank Lloyd Wright’s Broadacre City, 1934) to provide answers to the problems of humanity based on the utopias envisaging all the immense possibilities of technology.

A little later Modern Times (1936) came before its time with a superb Charlie Chaplin satirising the conflict between man and machine and destroying the idyllic dream of a new and perfect technopolis.

Paradoxically, Lewis Mumford, in Technics and Civilization (1934), with his apocalyptical predictions on the militarisation of science, illustrates this pessimistic counterpoint to programmes for social justice and education in values sponsored by the Modernist Movement.

We would have to wait till the 60s for the Archigram team (Plug-In-City, mega-structures, space capsules,…) and Constant Nieuwenhuys (Amsterdam 1920, Utrecht 2005 – New Babylon), with their futuristic proposals firmly following anti-design, anticipating both the société du spectacle (Guy Debord, Situationists, Lyricists,…) and the contemporary iconographies of urban planning for consumers and leisure pursuits.

The international isolation of Spain during the Franco years kept these intellectual movements on the other side of the border. But the fall of the regime in the 80s unleashed a wave of enthusiasm for opening up new channels and making new moves, inaugurating a period of frantic reforms for the modernisation and Europeanisation of the country.

The prominence of these changes quickly crystallised in all the big cities, where the policies inherited from spatial Fordism and Keynesianism (Gilles Pinson) were questioned, and ambitions plans for urban renewal were commenced.

In Spain of the autonomous communities the explicit absence of an ideology propitiated the triumph of a socio-liberal model under the shelter of a seductive and advanced consumer-oriented capitalism. This brought the city of spectacularity, theme-oriented and banal, favouring the unbridled proliferation of ostentatious institutional projects plagued with all kinds of excesses: the Terra Mítica theme park, the City of Culture, the Magic Box, the Ciudad Real Airport, etc.

The capital of the Valencian Community placed its bid (1991) on the City of Sciences to reinforce the value of its brand-name on the world map. With dimensions and scales that were truly grandiose, the redubbed City of Arts and Sciences is today a colossal collection of anthropomorphic artefacts: l’Hemisfèric (1998), Museo Príncipe Felipe, l’Umbracle (2000), the Palau de les Arts (2005) and l’Àgora (2009)…

The flowering of these megalomaniacal iconic constructions required the presence of a star architect, such as Santiago Calatrava, whose poetic narcissism, monumentality and immoderate irreverence would guarantee the sought-after iconic income from increasingly sophisticated and expensive showcasings.

Valencia jumped on the bandwagon of this fashion known as the Bilbao effect (Kenneth Frampton “Modern Architecture: A Critical History”). As an authentic reference to 90s-style marketing, the Basque metropolis achieved unprecedented media success thanks to the construction of the outstanding Guggenheim Museum by the American Frank O. Gerhy.

The age of globalisation (of markets, capital flows, communication…) brought the definitive triumph of spectacular images, of capricious shapes and boastful structures, as a result of the commercial and iconographic talent of a few consecrated architects.

Until the outbreak of the financial bubble (subprime mortgages), a good number of cities gave themselves the doubtful privilege of having the tallest skyscrapers in the world (Dubai, Beijing), the latest technological eccentricities, and the most audacious and innovative buildings…. And the organisation and celebration of all kinds of summits and trade events, leisure and cultural events, usually of galactic proportions…

In this context, the Valencian Regional Government (2003) made a decisive bid for the promotion of top sports events such as the America’s Cup and the Formula 1 European Grand Prix, plunging its accounts into unprecedented debt.

And, as in many other places (Seville’s Expo, for example), the actual result failed to bring the expected fruits, either economic or from the urban planning standpoint (Marina Real). The crisis finally unveiled the Pandora’s Box of extravagances, dysfunctions, mistakes and all the bills from public squandering, fuelling ever more anxiety and scepticism in a time full of collective despondency.

We urgently need to make a self-critical reflection on the origins of these planning disasters, all these failures with their lack of theoretical background, the worrying lack of responsibility in cost overruns, the reiterated architectural “fireworks” displays, the disappearance and breakdown of regional treasuries, the rise of an abstention democracy… all this is dependent on the fragile Homo ludens searching for his avant-garde utopia, like Constant’s, or towards the decadent Babylonia of the ancient seekers of wisdom.

We need a profound renovation of the prospective approach and our urban agendas. After decades of obsession with appearances, imagery and mass media, we cannot delay any longer the redesigning of current forms of government, which are obsolete, oversized and endogamic. We need a new political leadership, a plural governance, a broader citizen participation, more effective attention to the weak… and above all a more deliberative democracy (Habermas “Theorie des kommunikativen Handelns”) that is also more respectful with minorities.

This is because, without reducing the size and rationalising the function of our institutions, Spanish society cannot expect to redefine its identity or its future, and face the enormous challenges that globalisation brings in its train: structural deficiencies in our economy, competitiveness, environmental sustainability, unemployment, cuts in educations and health services, etc.