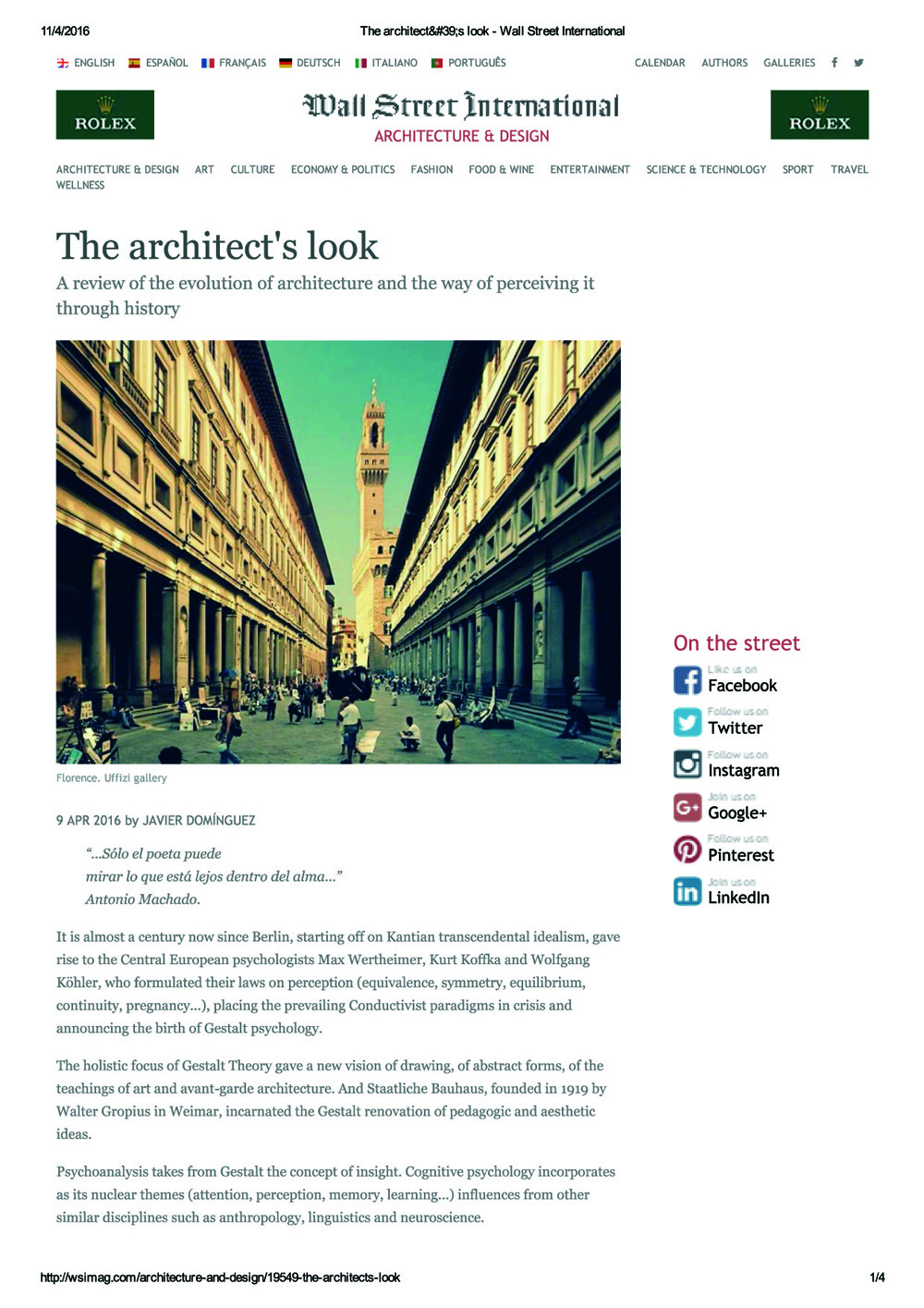 It is almost a century now since Berlin, starting off on Kantian transcendental idealism, gave rise to the Central European psychologists Max Wertheimer, Kurt Koffka and Wolfgang Köhler, who formulated their laws on perception (equivalence, symmetry, equilibrium, continuity, pregnancy…), placing the prevailing Conductivist paradigms in crisis and announcing the birth of Gestalt psychology.

The holistic focus of Gestalt Theory gave a new vision of drawing, of abstract forms, of the teachings of art and avant-garde architecture. And Staatliche Bauhaus, founded in 1919 by Walter Gropius in Weimar, incarnated the Gestalt renovation of pedagogic and aesthetic ideas.

Psychoanalysis takes from Gestalt the concept of insight. Cognitive psychology incorporates as its nuclear themes (attention, perception, memory, learning…) influences from other similar disciplines such as anthropology, linguistics and neuroscience.

Therefore, drawing is the authentic protagonist in architectural language and the plurivalence of its spatial definition. In his famous treatise on Saper vedere l´architettura, the Italian academician Bruno Zevi dissected the phenomenological specificness of this discipline, explaining the lack of cultural agreement between 20th-century criticism and professionals as a group.

Formerly, the birth of projects in the Renaissance and the discovery by Filippo Brunelleschi of the conical perspective – a figuration that approximates to the real vision of the human eye – announced a period of splendour that gave birth to masterworks such as the grandiose dome of the cathedral of Santa Maria del Fiore.

The legacy of this Italian master was extraordinary: the invention of ingenious instruments such as la tavoletta, pictorial studies of optical illusions and imaginary spaces (skies of burnished silver…).

Nevertheless, Alberti, despite providing us with De pictura (1436), the first scientific definition of perspective continues to recommend the use of mock-ups and models for ideation. We would have to wait for Rafael to give us orthogonal projection consecrated in architectonic representations.

Those humanistic artists demonstrated for the first time to the world that the action of looking and observing required graphic knowledge and skills – optical, geometric and mechanical.

The pictorial historiography explains the genesis of the concept of landscape, which achieved relevance in the West as from the 16th century, when man decided to start contemplating his surroundings. Art reflects on when and how the act of looking at landscapes by human beings, attempting to discover artistic, aesthetic and philosophical ideals in writers and contemporaries.

Landscape presents nature in a sublime way (Dürer), commanded over by men (Flemish, Dutch,…) or colonised by man (Caravaggio). The avant garde exhibits oneiric landscapes inspired by dreams that inhabit the territory of surrealism (Magritte, Dalí,…).

At the start of the 20th century descriptive geometry created by Garpard Monge is was founded anew by Johann Müller, which enabled us to incorporate advanced techniques such as holography, invented by the Nobel prize-winner in physics Dennis Gabor.

Constructing and drawing are different operations, but the sketch, the rough drawing, the plan, are indispensable in the daily activities of the architect. In the 20th century, systems of graphical expression have acquired an extraordinary level of maturity, giving drawing a value such as prefiguration and meta-language, which goes beyond its traditional representative function to become the authentic essence of architecture.

The search for perfection and for a set of standards and cannons of beauty fuel reflections and texts of the writers of treatises, while since the Renaissance drawing has provided never-ending examples and references of the Classical world.

Thanks to this, the iconography of most monuments that make up the constructive memory of humanity is unveiled and remains in illustrations, engravings and paintings of all ages.

This marriage of the two brought about the rise in the 19th century of architectural wonders and to cap these off we had the resurgence of the Gothic style, especially in England (Westminster Palace) and France (Sainte Chapelle) thanks to the watercolours with restitutions of buildings built by Viollet-le-Duc.

The discovery of polychrome pieces in Classical architecture which had been imagined as being white and pure fuelled a frenzy of light and a colour pallet that invaded painting, industrial design, architectural drawing and in consequence the works themselves that were constructed. In this way movements such as De Stijl (Piet Mondrian, Gerrit Rietveld, Theo van Doesburg,…) converted colour into a priority objective of plastic investigation.

The configurational and expressive possibilities of shape, and the allegorical, affective, symbolic and psychological values of colour, found their programmatic fundamentalism in Bauhaus (Kandinsky, Klee…).

The great discoveries – Pompey, Rosetta, Petra, Machu Picchu – were decisive in getting architecture involved in the conservation and restoration of historical heritage.

Europe experienced an authentic neo-Gothic fever that presaged the termination of many cathedrals (Paris, Barcelona…) and articulated the preservation of buildings from the past, despite the fact that little by little interest in reinterpreting historical styles were on the wane.

Inventories and registers multiplied, and abundant documentation was compiled (prints, photos, documents…) that provided the first essential catalogues for understanding why the vision of the architect began to be studied in this relationship between cartography and the hidden memories of cities.

The evolution of this vision, seriously hindered by the dramatic consequences of the destruction and annihilation of much heritage by the great world wars, is essential for a comprehension of the current situation and understanding of the polysemic significance of architectural territory and space in the age of knowledge.