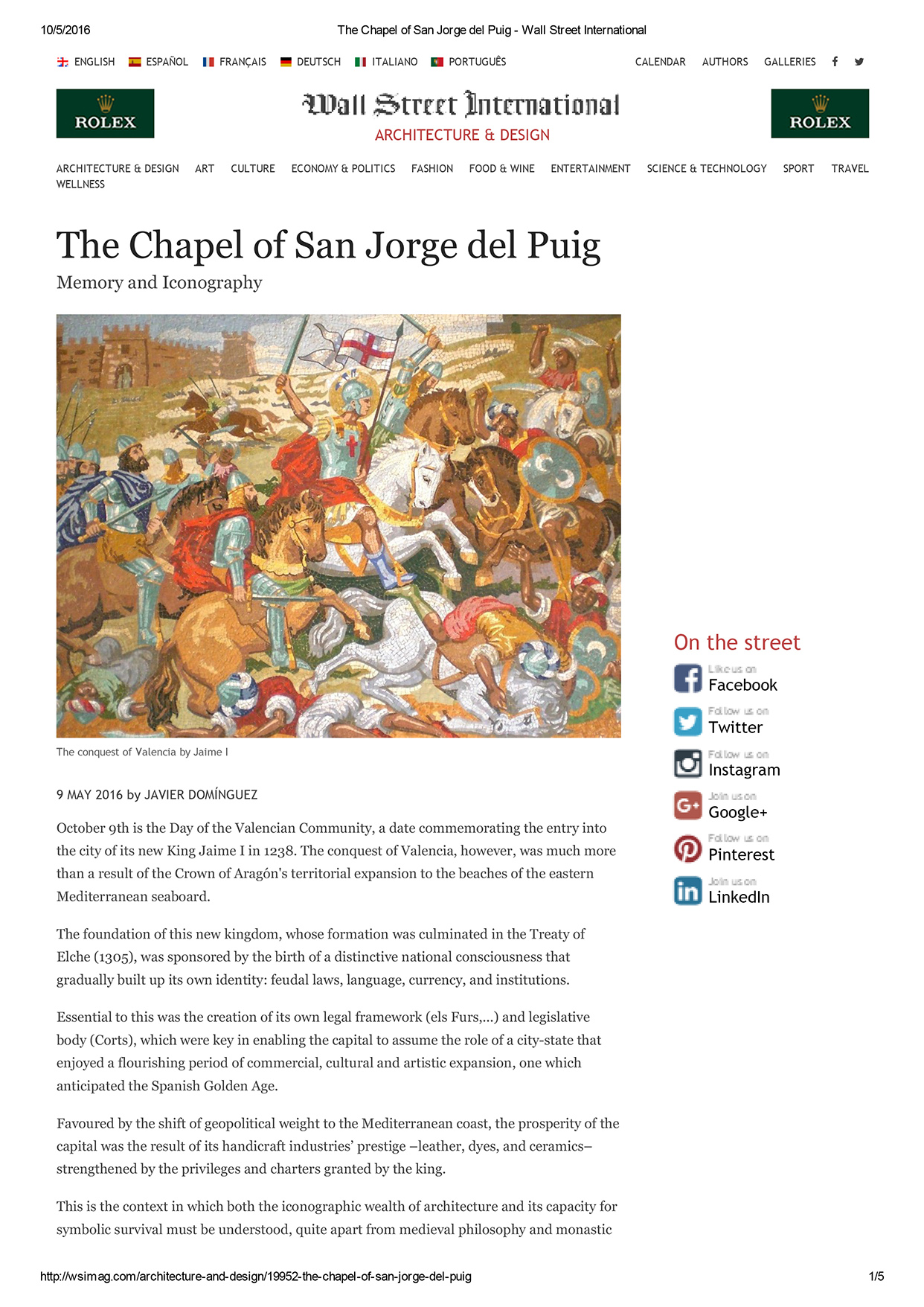 October 9th is the Day of the Valencian Community, a date commemorating the entry into the city of its new King Jaime I in 1238. The conquest of Valencia, however, was much more than a result of the territorial expansion of the Crown of Aragón to the beaches of the eastern Mediterranean seaboard.

The foundation of this new kingdom, whose formation was culminated in the Treaty of Elche (1305), was sponsored by the birth of a distinctive national consciousness that gradually built up its own identity: feudal laws, language, currency, institutions,…

Essential to this was the creation of its own legal framework (els Furs,…) and legislative body (Corts), which were key in enabling the capital to assume the role of city-state enjoying a flourishing period of commercial, cultural and artistic expansion that anticipated the Spanish Golden Age.

Favoured by the shift of geopolitical weight to the Mediterranean coast, the prosperity of the capital was the result of the prestige of its handicraft industries – leather, dyes, and ceramics – strengthened by the privileges and charters granted by the king.

This is the context in which both the iconographic wealth of architecture and its capacity for symbolic survival must be understood, quite apart from medieval philosophy and monastic asceticism.

Located in the municipality of the town of El Puig, in the heart of the fertile orchard lands along the road to Pobla de Farnals, the uniqueness of the Chapel of San Jorge resides not so much in its architectural attributes or artistic values – transept, garden, mosaics – as in its appropriateness in becoming one of the symbols of the reconquest of the Kingdom of Valencia, and especially its capital, back in the 13th century.

As Professor Ramón Ferrer Navarro pointed out, the concept of Reconquest maintained a virtually unique meaning up to the 20th century: as contained in the Chronicles of Alfonso III. Nevertheless, during the seven centuries that separate the initial Covadonga victory from the final taking of Granada, although the military efforts of recovering lost borders and enclaves remain constant, this is neither true in its form, nor in its methods.

The 13th century was that of the great Christian conquests, and the Crown of Aragon, in the person of Jaime I, found the ideal monarch to fulfil its dreams of expansion.

The decay and decomposition of the Valencian Taifa kingdoms facilitated the advances of the Christians and shortened their battling time, but the taking of Valencia was only possible after the Battle of Enesa.

The strategic role of the fortifications of El Puig was decisive for the siege of King Zayyan’s positions and, above all, for the outcome of the famous battle that took place on 20 August 1237.

In this battle, the troops commanded by the uncle of the conqueror and the governor of El Puig, Bernardo Guillén de Entenza numbered only a few hundred professional soldiers on leather-clad horses, who defeated the Muslims numbering some ten thousand, mostly forcefully conscripted farmers.

On the site where this fierce encounter took place, a wooden cross was erected, replaced in the 16th century by today’s current stone cross, and later a chapel dedicated to St. George, patron of the Aragonese warriors and champion of their victory according to tradition, was erected to commemorate their proverbial participation in this combat.

The first word we have of the Chapel dates back precisely to 1237, during the siege of the Madinat al-Turab, whose wall was built by the grandson of Almanzor Abd al-Aziz: «The Valencians of the year 1574, who will never forget the place where this battle was fought and which originated their present welfare…, agreed to replace the wooden cross with an artistic stone cross while building at this time a small chapel … thus fulfilling the pact sworn in 1372 by our magnificent forebears.»

The Chapel is actually a small, sober building in square shape with rectangular elevations topped by an octagonal dome on smooth pendentives.
The whole work is in ashlar masonry – with local cluster-pine wood beams – although the corners, lintels and jambs are highlighted by stone and brick reinforcements.

It still maintains its appearance today thanks to the careful restoration work carried out in 1926 by Manuel Cortina Pérez, undoubtedly one of the most prolific of Valencian modernist architects. We are indebted to him for the discovery of the remains of the Apritador or parapet, of the cathedral’s Miguelete tower, and for many creative contributions to the city’s decorative repertoire in the 19th century. His language boasts medieval exercises which are sometimes quite fantastic, such as winged dragons and snakes, and at other times romantic in tone with whimsical shapes – stone rosaries – and even oriental excursions, such as Neo-Arabic filigrees.

In the Chapel, the choice of the builders to make a square floorplan is obvious, due to their need to orient their architecture, that is, to place their shrines in line with the four directions of space, and thus with the universe as a whole.

The cubic city is constantly referred to in the Bible, with the precise reference being the evocation of the Book of Revelation in the passage on the heavenly Jerusalem:
“…And I John saw the holy city, new Jerusalem, coming down from God out of heaven, prepared as a bride adorned for her husband.”  “…and her light was like unto a stone most precious, even like a jasper stone, clear as crystal.” This description of St John is part of the Epistle that is read during the rite of consecrating temples.

The architecture of the Chapel is therefore a paradigm of a unified conception of the cosmos and hence its significance, which speaks of a certain vision of the world and a series of specific symbolic values.

The main theme of the Sanctuary – The Glorious St Jordi, Patron Saint of Valencia and its kingdom – is depicted by St. George and the Dragon, whose iconography comes from the apocryphal story of  Jacobus de Voragine in his Golden Legend (1264).

The iconographic repertoire of the ensemble focuses on the memory of that epic – the Battle of Enesa – whose success is attributed to the appearance of the Saint, depicted as slaying a dragon, and therefore guarding the shrine. But tradition also attributes the triumph of Guillén Enteza and the subsequent surrender of Zayyan to the discovery on the hill of El Puig of an icon of the Virgin, whom Jaime I proclaimed as patroness of the new Kingdom of Valencia.

This is where the iconography of the Chapel extends to the nearby monastery, whose grandiose monumentality against the diminutive nature of the Chapel helps to explain its erstwhile neglect and decline into practical oblivion.