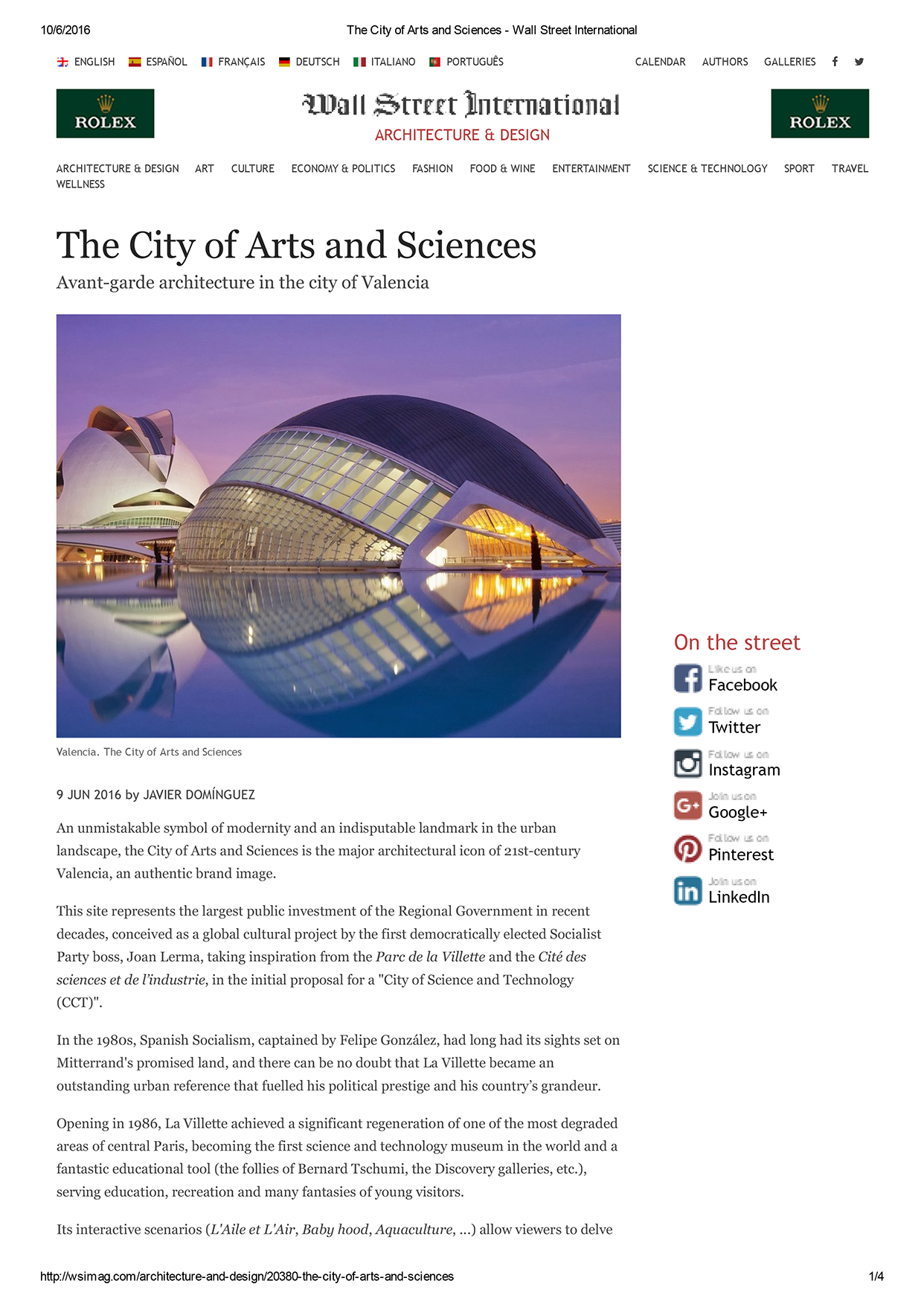 Articulos
THE CITY OF ARTS AND SCIENCES
9 junio, 2016 By Javier Dominguez
0

THE CITY OF ARTS AND SCIENCES

An unmistakable symbol of modernity and an indisputable landmark in the urban landscape, the City of Arts and Sciences is the major architectural icon of 21st-century Valencia, an authentic brand image.

This site represents the largest public investment of the Regional Government in recent decades, conceived as a global cultural project by the first democratically elected Socialist Party boss, Joan Lerma, taking inspiration from the Parc de la Villette and the Cité des sciences et de l’industrie, in the initial proposal for a «City of Science and Technology (CCT)».

In the 1980s, Spanish Socialism, captained by Felipe González, had long had its sights set on Mitterrand’s promised land, and there can be no doubt that La Villette became an outstanding urban reference that fuelled his political prestige and his country’s grandeur.

Opening in 1986, La Villette achieved a significant regeneration of one of the most degraded areas of central Paris, becoming the first science and technology museum in the world and a fantastic educational tool (the follies of Bernard Tschumi, the Discovery galleries, etc.), serving education, recreation and many fantasies of young visitors.

Its interactive scenarios (L’Aile et L’Air, Baby hood, Aquaculture, …) allow viewers to delve into the secrets of biology, mechanics, physics and astronomy, and even have fun learning.

The most significant and attractive part of the complex is the spectacular Geode or magic ball designed by the architect Adrien Fainsilber, a huge sphere 36 metres in diameter with a reflective skin of polished stainless steel, housing a hemispherical screen cinema inside.

Determined to have their own version of such an ambitious programme, the Valencian Regional Government Council commissioned the design of the Valencia City of Arts and Sciences to Santiago Calatrava Valls in 1991, who formulated it as a cohesive puzzle comprising a Planetarium, a Telecommunications Tower and a Science Museum.

Located on the banks of the old Turia riverbed, the CCT was freely organised around an inner structural axis defined by the spectacular 325m tall tower, with which Valencia sought to strengthen its role as a Mediterranean capital, in a bid to host the European Euronews TV headquarters, a privilege that was finally granted to Lyon.

Substantial modifications were made to that initial approach in 1995, when the works were already quite advanced, at the behest of the first Popular Party government in the Region, and these explain some of the urban and functional misinterpretations of the current City of Arts and Sciences, which was how it was renamed at that time.

This is also how certain imbalances were created with respect to the Turia River Gardens, although the buildings were placed on the original level of the riverbed. Calatrava opposed the concept of a continuation of the riverbed gardens proposed by Ricardo Bofill and opted for giving a more prominent role to the river itself, so now the Museum sits on a huge podium/spring facing a spectacular pool of water, giving prominence to this riverbed.

But above all, it was the elimination of the Telecommunications Tower, the most significant piece of the original macro-project, and its replacement by the Opera House that caused a typological loss resulting in new dysfunctions, quite apart from its extremely high cost overruns: an insular configuration, lack of accessibility, the absurd construction of new pseudo-historical parapets, and more bridges crossing the green zones below…

The vulgarity of the actual placement of buildings and the surrounding skyline (overdensification, staggered constructions, …) represents the failure of these extraordinary public facilities to really become a driving force in the development and consolidation of quality urban fabric, as in their day many others did achieve: Ringstrasse in Vienna, Beaubourg and Les Halles in Paris, the Olympic Village in Barcelona, Seville’s Expo, and Bilbao’s Guggenheim…

On the other hand, by suppressing the technological component of the proposal – the Tower – both the stage setting and the purely visual appearance of the complex were overstressed, as was its role as a centre for entertainment, communication, advertising and promotion, to the detriment of the initially well-construed thematic approach.  Although perhaps because of this, it has managed to become a major tourist attraction in the capital.

Out of context and incapable of adapting to the highly prized topography, but boasting grandiose dimensions and scale, the City of Arts and Sciences today is a colossal collection of gigantic anthropomorphic artefacts: the Hemisfèric (1998), Prince Felipe Museum and the l’Umbracle walkway (2000), the Palace of the Arts (2005) and l’Agora (2009).

Only the suggestive organically-inspired formalism of Calatrava (skeletal structures, carcass skins, ships, water mirrors, …), his irreverent hubris and his self-absorbed poetry (repetitive but richly expressive and artistic in white concrete, steel, trencadís, and blue and white), define this new super-sized monumentality that characterises both the style and the refined biomorphic vocabulary of this Valencian architect, who has achieved a great amount of iconic revenue therefrom.

The l’Hemisfèric planetarium and theatre, flanked by two large rectangular pools, houses a spectacular IMAX Dome cinema with its Omniscan Laser, seating 300 people. Here, also, the initial project was changed, giving the sphere a partial covering in the form of a retractable, ovoid-shaped mechanical eyelid, no doubt an analogy of the all-seeing eye of Wisdom.

The Prince Felipe Science Museum is a rectangular shaped building with its longest side parallel to the riverbed, organised into an impressive glazed longitudinal gallery conceived as a gigantic hall.

The defiant skeletal structure, resembling a ribcage, generates a space of overwhelming proportions, from whose ceiling Calatrava hung a Mirage fighter plane, a magnificent Foucault pendulum and a reproduction of the DNA helix. But this container itself is so impressive and photogenic that it manages to completely overshadow its content, despite the valuable permanent collection displaying the evolution of scientific research and many of the secrets of genetics, magnetism and radiation.

Nevertheless, the way it was built revealed serious difficulties in air-conditioning, soundproofing and lighting control, evidencing the complex’s environmental and energy efficiency deficiencies, not to mention the lack of important safety measures (evacuation stairways).

L’Umbracle is a lookout walkway that was not part of the initial project either, but was opened later, simultaneously with the Museum. It is a visual filtering space consisting of a sequence of white latticework constructions twenty metres high, quite distinct from the surrounding environment.

But undoubtedly the most spectacular jewel in this crown is the Queen Sofia Palau de les Arts, whose double skin, comprising a giant cantilevered metal housing, gives total monumentality to the complex, now completed with l’Agora, a huge covered plaza 70 metres high.

The Palau is reminiscent of those white hemispherical helmets worn by Star Wars Imperial troopers. This gigantic shell/crest/feathered cap in metal allows viewers to see impressive landscaped terraces and loggias from the outside, whereas inside there is a concert hall with a capacity for 1700 spectators and an amphitheatre seating 1500.

Again, over-design and constant dimensional and sculptural challenges convert these skeleton structures pushed to the limit into a source of fascinating theatrical bravado, without which, perhaps, the City of Arts would never have become the paradigm and symbol of some of Valencia’s major events: America’s Cup, the Formula 1 races, the Tennis Open… nor would it have enjoyed the magical ability is has to surprise and thrill visitors from all over the globe.