Warning: mysqli_num_fields() expects parameter 1 to be mysqli_result, bool given in /homepages/16/d472236276/htdocs/clickandbuilds/JavierDominguezArquitecto/wp-includes/class-wpdb.php on line 3574 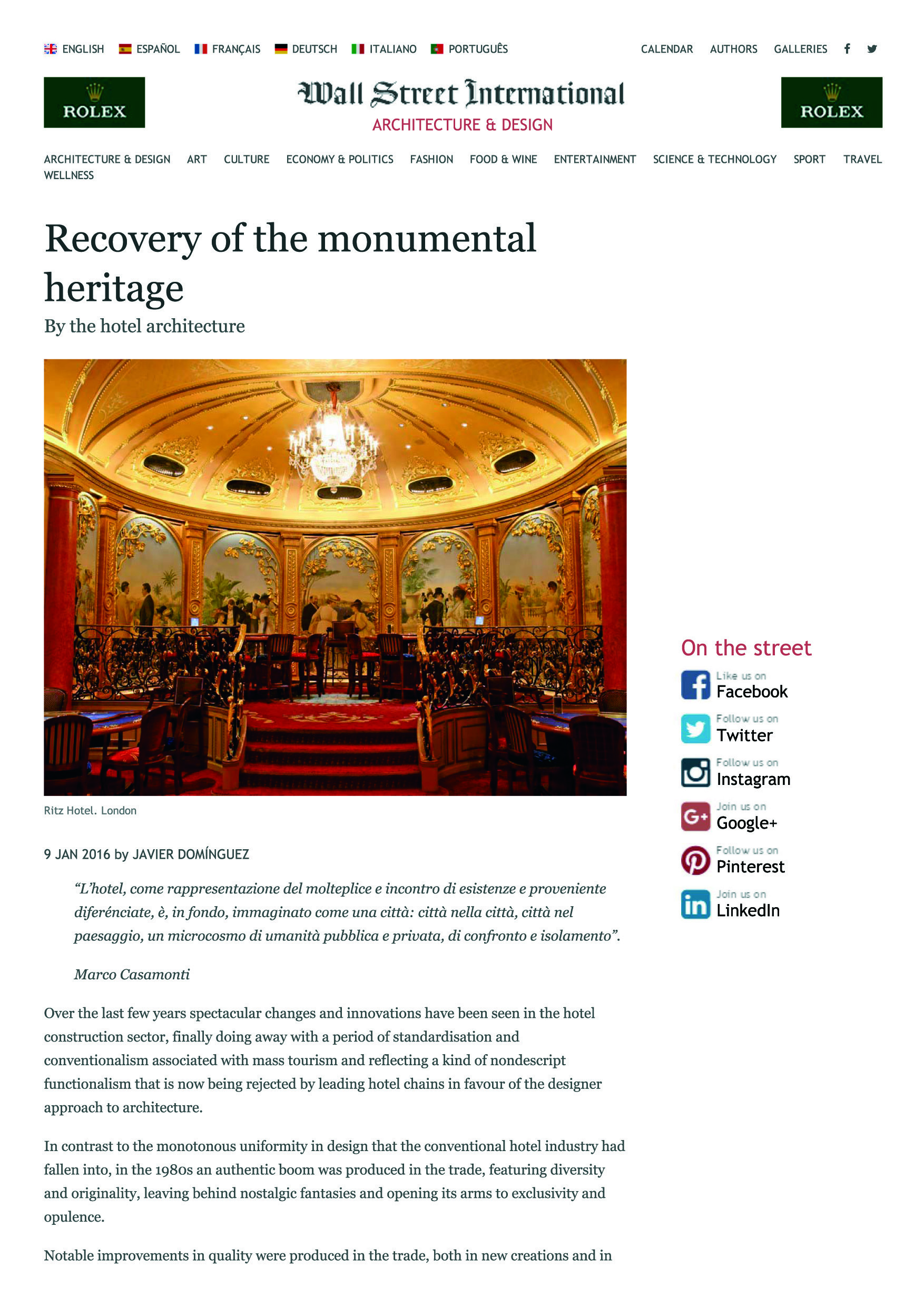 Articulos
THE RECOVERY OF THE MONUMENTAL HERITAGE BY THE HOTEL ARCHITECTURE.
9 enero, 2016 By Javier Dominguez
0

THE RECOVERY OF THE MONUMENTAL HERITAGE BY THE HOTEL ARCHITECTURE.

Over the last few years spectacular changes and innovations have been seen in the hotel construction sector, finally doing away with a period of standardisation and conventionalism associated with mass tourism and reflecting a kind of nondescript functionalism that is now being rejected by leading hotel chains in favour of the designer approach to architecture.

In contrast to the monotonous uniformity in design that the conventional hotel industry had fallen into, in the 1980s an authentic boom was produced in the trade, featuring diversity and originality, leaving behind nostalgic fantasies and opening its arms to exclusivity and opulence.

Notable improvements in quality were produced in the trade, both in new creations and in numerous refurbishments of older establishments. In addition, the hotel reconversion initiatives undertaken on old buildings in major historic city centres, such as the commercial buildings in London’s West End, or the designs for the Lucerne Hotel by Jean Nouvel in Switzerland, or the Regent Wall Street by Wilson in New York, transforming the ancient Merchant’s Exchange (1827) and later Bank building into a fashionable hotel for the Regent International chain, have definitely contributed to the regeneration and reorganisation of major urban areas.

In Spain there are particularly significant examples in the ambitious modernisation operations for infrastructure and services that Seville (Hotel Los Seises,…), Barcelona (MBM’s Hotel Claris, Havana Palace,…),Valencia (Hospes, Westin, Barceló,…), Zaragoza (Hiberus,…)  undertook in the 1990s in response to the Universal Exposition, the Olympic Games, the America’s Cup and and of the Expo of Zaragoza.

Perhaps the most modern aspect of hotel design in recent years is its special approach to globalness, not so much for the adoption of certain design strategies intended to enhance the brand name of hotel chains, but rather due to the incorporation of native cultural styles and traditions with such a degree of intensity that they have become authentic catalogues of ethnocultural diversity.

Today, hotel chains have two main strategies: the extensive and the intensive. The extensive strategy involves gigantic complexes generally reflecting recreational and fictional architecture that has given rise to self-sufficient vacation paradises implemented in Hawaii and Las Vegas all the way to Southeast Asia. These complexes are authentic luxury oases conceived for five-star tourism looking for mega-attractions.

It is in the gambling and entertainment capital of Las Vegas, Nevada, where the kitschiest mega-palaces can be found: The Venetian, Caesar’s Palace, Luxor, Excalibur,… To paraphrase Venturi in his famous Living Las Vegas, icons such as the Eiffel Tower and St Marks Square have been converted into pure stage design to provide impact and pulling power. A society with a totemic addiction to money builds its symbol of worship: the hotel-casino, the main feature of a metropolis themed on a vulgar kind of architecture infested with falsifications at the service of media showiness.

Testifying to this is the success of the Disney factory in the creation of the most prodigious and incredible fantasies alongside its popular theme parks, building authentic entertainment and vacation hotels, even boasting the luxury of commissioning some of the leading names in international architecture, such as Michael Graves, the father of postmodernism, Frank Gehry and Arata Isozaky.

Every year Disneyland Paris receives more visitors than double the Louvre and its hotels The Disney World Swan of 758 rooms and Dolphin of 1.510 on the outskirts of Disney World (Orlando) are a unique example of the historical architecture.

The sheer popularity of leisure packages offered by tour operators is the best example of the market situation in global tourism, fueled by the democratisation of mass transit and resulting in the proliferation of megahotels like artificial islands spread around the world, from the Caribbean to northern Africa.

In contrast, some corporations have opted for the intensive strategy, focused on the operation of small, expensive hotels providing guests with maximum quality services and facilities, recovering the Grand Hotel style of the inter-war period.

The return of the luxury Grand Hotel, the archetype of the belle époque, which had practically disappeared from the international scene due to post-Second World War depression, came into being once again parallel to the consolidation of today’s information society, whose transition was foretold by Alvin Toffler in his “Third Wave” and announced later by Francis Fukuyama, proclaiming the triumph of knowledge over production, and ushering in a new democratic and capitalist order.

This is in the final analysis a nostalgic movement that has achieved enormous success in the wake of international conservativism chosen by the new middle classes. Thus, the American Ritz Carlton Group has managed to convert baroque, luxury classicism into a house name.

We should remember that it was from the second half of the 19th century, parallel to illustrated reforms and industrialisation, when two new types of architecture were consecrated: the railway station and the hotel. Both in big cities and in new European thermal towns (Bath, England,…) or seaside resorts (La Toja, Spain,..), as well as in the mountains (Aix-les-Bains, Saint-Moritz, Baden-Baden, Vichy,…), the hotel became a kind of luxury oasis in a theatrical setting intended for the bourgeoisie, in a kind of guest pavilion capable of submerging the spectator in a universe of recreation, pleasure and fantasy.

The thermal revival Europe lives for decades demonstrates the enormous public awareness of welfare and health and explains the boom in spa at the city hotels. The spa acronym derived from the Latin salutem per aqua, health through water, is actually an ambiguous term under which we can find from a beauty salon, going through a social center to a medicinal recreational complex.

The predominant formal language became eclecticism, with magnificent Central European undertakings in Art Nouveau style and a few influences from the Modernist movement, explaining the subsequent triumph of Art Decó in the 1930s, such as Miami Beach. The return of these ancient hotel-palaces, the classic grand luxury hotel, such as the Ritz or the Bristol in Paris, made establishments like the St Regis in New York or the Langham in London become new flagship sites in the ITT Sheraton and Hilton International chains.

Leaving aside the above considerations, today there are many brands that have opted for a policy of recovery of the historical dimension in hotel architecture without sacrificing the luxury of a modern hotel that, as singular stage of social ceremonies, should be a true reflection of their culture. And from there, the new boutique hotel and art hotel museum hotel (The Gershwin in Nueva York, Gladstone in Toronto…) who flirt openly with the art world.

In the hotels Westin, Hospes,… just like in its original Roman references, customers can find baths, pools, sudatoria with various temperatures… complemented by libraries, a gymnasium and other exercise and entertainment areas.

Despite this, and in contrast to other hotel chains, the proposals from Ferrero, Hospes -Maricel, Palacio de los Patos,…- did not involve the reconstruction of an erstwhile hotel-palace to create a kind of theatrical setting, as is often the case, full of luxurious and over-blown historic decorations, but rather focused on the achievement of a truly new interpretation of the available historic architecture, with the clear triumph of modernity as regards formal language, proposals in style, technical solutions, spatial structure and so on.